I sincerely apologize for my lack of posting recently! Life and finals have got me crazy busy!

So the other day I was having a conversation with some friends about how things have changed as we have grown up. Society has changed in so many ways, some for the best and some not so much. Then I happened to stumble across an article that directly correlated to that conversation. I took it as a sign, and here I am.

To put it simply: the kids in today’s society just have it too easy and feel like they are entitled to everything.

This is not to “take over” the article that I read recently, this is just to spark my opinion on that same topic. Social media is both a blessing and a curse. It’s a blessing in the sense that you get to see different posts and such from everywhere in the world. It’s a curse in the sense that not everything you see is true nor should it always be posted.

While on twitter the other day, I came across a post that was talking about something a child had posted about their mother on facebook. This child was ranting about how their mother was the worst one in the world because she took their phone away because they were failing their high school classes. My immediate thoughts:

I can tell you that if I ever failed a class in high school, my phone getting taken away would be the least of my worries. The kids in today’s society have never truly been disciplined when they do wrong and when they are, they throw a fit about it. While there is a fine line between discipline and child abuse, a few backhands never hurt anyone…just saying.

Another thing that I have greatly noticed about today’s society in comparison to when I was a younger kid growing up, everyone is WAY too sensitive. I personally am one of the least sensitive people I know so, to me, everyone is way too sensitive. However, what I am talking about now is just way too much.

I come from a very joking family. Every single family gathering consists of roasting each other and making jokes that are hilarious when not taken to heart. I have always grown up learning to not take what people say about you so seriously. However, I feel like every time I turn around some one is getting butthurt over something someone said. When did our society turn into a bunch of wimps?

What other people say shouldn’t affect you all the time. Sure some people’s opinions matter more than others, but don’t be overly sensitive and offended every time someone says something you don’t like or agree with. Tough love is a real life thing, and if you get offended every time someone says or does something, you are going to have a rough life.

Another thought: why are we handing everything to everyone now?

Kids feel entitled to everything because they have never been told no. They get everything they ask for and never have to put in an ounce of work to get it. What happened to tough love? Where you didn’t give someone something that they wanted because you wanted them to learn that not everything gets handed to you on a silver platter? When you give someone everything without them ever having to work for it you are not only giving them the sense of entitlement that they will forever believe they have, but you are also ruining the value of a work ethic. No one works for anything anymore, because they just think someone is going to give it to them. That isn’t how the real world works. You are setting them up for failure. Sometimes you need to be mean and not give them anything; make them work for it. Make them realize that good comes from working hard and that results are tied to performance. Stop raising a bunch of spoiled brats.

Last thought about today’s society: you are not entitled to anything.

Just because you are a person does not mean you are better than everyone else. You hold no authority whatsoever and to be honest, you really have no say in anything. A certain example comes to my mind when I think of this.

I know this is a very touchy subject, and I am by no means taking sides because no side is correct every single time. However, police are not always the bad guys. This is how it should go:

You do not throw a fit and start yelling at him, because he is just doing his job. When you disobey, it just makes it look like you are hiding something, and that can only lead to more problems. You are a kid who has no authority so you’re only job is to do what you are told.

I can’t wrap my head around this sense of entitlement that everyone seems to have nowadays. Talking back to people above you is not something you do.

I’m not sure when society went so down hill, but we need to fix it. Don’t keep raising babies who get hurt when someone says their hair looks bad, don’t raise punks who talk back to their teachers and make a scene when they were asked to stop talking, don’t allow your kids to talk back to you like they own you when you actually own them, and most importantly, don’t be afraid to tell them when they are wrong because we can’t have a bunch of kids who think the light comes where the sun don’t shine.

You are giving people a reason to hate us, and you’re ruining it for everyone else. 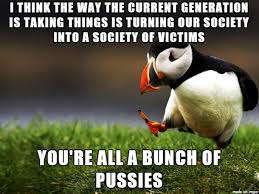